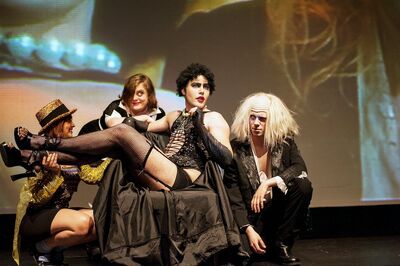 The cult following The Rocky Horror Picture Show (1975), or audience participation, is a cultural phenomenon surrounding the large fan base of enthusiastic participants of the movie generally credited as being the best-known cinematic "midnight movie", if not the first. The film gained popularity because of fan participation as much as anything else. "Shadow Casts" of fans acting out the entire movie below, or in some cases directly in front of the screen, are almost always present at showings.

During a showing, ad-lib responses, more commonly known as call backs, are lines the audience may shout out in response to events occurring on screen, as a form of audience participation. In some venues, audience members who provide incorrect or poorly timed responses may find themselves angrily shouted down just as if they were being disruptive in a normal movie. However, creative new lines are usually applauded and even added to the local repertoire. There have been audience participation albums recorded and scripts published. However, most fans feel that it is preferable for responses to grow organically from the local culture.

The film came about due to the tremendous success of the stage musical and opened in the United States at the United Artists Theater in Westwood, Los Angeles, California, on September 26, 1975. Although the theater was selling out every night, it was noted that many of the same people were returning to see the movie. This situation on LA turned out to be an exception, not the rule as it was not doing well elsewhere in the US. 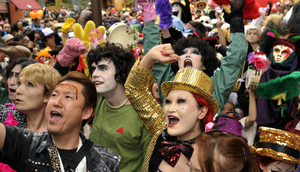 The film was then re-launched as a midnight movie, beginning its run at the Waverly Theatre in New York on April 1, 1976. The Riverside Twin in Austin, Texas, became the second location to run the film as a midnighter. Over time, people began shouting responses to the characters' statements on the screen. Schoolteacher Louis Farese, Jr., Theresa Krakauskas and Amy Lazarus, who attended together at the Waverly, are credited with having started the convention of talking back to the screen, bringing props and making up one-liners, the purpose of which was basically to make one another laugh. They had no idea that in doing so, they'd create something that would last decades. As Amy Lazarus once said, "we just trying to have a good time." A showing of the film at the 1976 World Science Fiction Convention spread its fame to a new cadre of enthusiasts.

A part of audience reception can be recreating the art. This is how the fandom of Rocky Horror developed into a standardized ritual. The performances of the audience were scripted and actively discouraged improvising, being conformist in a similar way to the repressed characters. Rocky Horror helped shape conditions of cult film's transition from art-house to grind-house style. 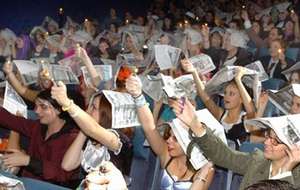 Early participation with the film took place at the original Westwood location of the film's first run with fans heard singing along. Waverly Theatre fans in New York are credited with the call back lines. Performance groups became a staple at Rocky Horror screenings due in large part to the prominent New York City fan cast. The cast was originally run by former schoolteacher and stand-up comic Sal Piro and by Dori Hartley, one of several performers in a flexible, rotating cast to portray the character of Frank-N-Furter, shadowing the film above.

According to J. Hoberman, author of Midnight Movies, it was after five months into the film's midnight run when lines began to be yelled by the audience. The first person to yell out an audience participation line during a screening was Louis Farese Jr., a normally quiet teacher who, upon seeing the character Janet place a newspaper over her head to protect herself from rain, yelled, "Buy an umbrella you cheap bitch". This self-proclaimed "counter point dialogue" was soon helped into standardization by Piro and repeated nearly verbatim at each screening. By that Halloween, people were attending in costume and talking back to the screen. By the end of 1979, there were twice-weekly showings at over 230 theatres.

The National Fan Club began in 1977 and would merge with the International Fan Club; the fan publication The Transylvanian printed a few issues. A semi-regular poster magazine was published as well as an official magazine. 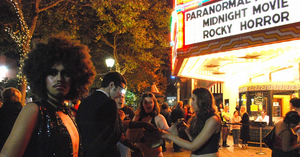 The Los Angeles area performance groups originated in 1977 at the Fox Theatre, where Michael Wolfson, portraying Frank, won a look-alike contest, as well as another at the Tiffany Theater on Sunset Blvd. Wolfson's group would perform in all of the LA area theaters screening Rocky Horror, including the Balboa Theater in Balboa, The Cove at Hermosa Beach and The Sands in Glendale, and was invited to perform at the Sombrero Playhouse in Phoenix, Arizona. At the Tiffany Theatre, the audience performance cast had the theater's full cooperation; the local performers entered early and without charge.

In San Francisco Rocky Horror would move from one location to the Strand Theatre located near the Tenderloin on Market Street. The performance group there would act out and perform almost the entire film, unlike the New York cast at that time. The Strand cast was put together from former members of the Berkeley group, disbanded due to less than enthusiastic management. The Strand group had performed at two large science fiction conventions, in Los Angeles and San Francisco, and were offered a spot at The Mabuhay, a local punk club; and even performed for children's television in Argentina.

Audience participation also includes dancing the Time Warp along with the film, and throwing objects such as toast, water, toilet paper, hot dogs, and rice at appropriate points in the movie. Many theatres forbid throwing items that are difficult to clean up. In many cases, a total ban on throwing objects has been instituted due to severe damage to movie screens. Fans often attend shows in costume as the characters. At a now-defunct theater in New Orleans, the local "Eddie" would ride his motorcycle down the aisle during Meat Loaf's/Eddie's song, "Hot Patootie." 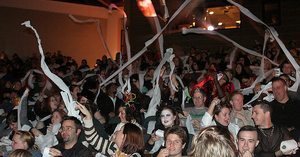 To the fans, Rocky Horror is a repeated cycle, of going home and coming back to see the film each weekend, making the practice a ritual of compulsive, re-affirmation of community that has been compared to a "religious event". The audience call backs are like responses in church during a mass. The Rocky Horror Picture Show has a global following and remains popular well into the 21st century, 20th Century Fox (now 20th Century Studios), the former distributor, had a longstanding policy that offered most of the films in its archive to any theater who requested it, thus allowing older films to receive theatrical showings far longer than other studios' films. As a result of this policy, and of the frequent requests for the film, it has remained in continuous circulation since its release. The Walt Disney Company ended this policy when it acquired 20th Century Fox in 2019, but it made an exception for The Rocky Horror Picture Show because of its long history.

If you want a read an example of a call back script, you can read it here.

Community content is available under CC-BY-SA unless otherwise noted.