1967–present
Julie Covington (born 11 September 1946, London) is an English singer and actress, best known for recording the original version of "Don't Cry for Me, Argentina".

She attended the girls' grammar school Brondesbury and Kilburn High School in Kilburn.

Covington's break came in 1967 when, as a student at Homerton College, Cambridge, she was invited to sing on David Frost's television show. After the show, she secured a recording contract.

In 1971, she was cast in the original London production of Godspell at The Roundhouse, alongside David Essex, Jeremy Irons and Marti Webb. A recording of the production, featuring Covington's lead vocal on the track "Day by Day", was released in 1972. She was then cast as Janet Weiss in the original production of The Rocky Horror Show in 1973.

Between 1974 and 1984 Covington appeared regularly in the companies of the National Theatre and the Royal Court Theatre, creating such roles as Alice in Plenty, Vivienne Eliot in Tom & Viv (for which she received an Olivier Award nomination) and Edward in the original production of Caryl Churchill's Cloud Nine.

During the early 1970s, she appeared and sang on the children's television programme Play Away. She starred in the BBC's 1975 Christmas production Great Big Groovy Horse, a rock opera based on the story of the Trojan Horse shown on BBC2. It was later repeated on BBC1 in 1977

1976 and 1977 saw her appearing in both series of the primetime British television programme, Rock Follies.

In 1976, the composer Andrew Lloyd Webber saw her perform in cabaret, and recognising her from Rock Follies, suggested to lyricist Tim Rice that she might be the actress to play the title role in their original studio recording of their musical Evita. The singer Elkie Brooks had previously turned down an offer. Covington's recording of the song "Don't Cry for Me Argentina" reached No. 1 in the UK Singles Chart in February 1977. Later offered the opportunity to originate the role in the stage production of Evita, she declined, which led to Elaine Paige being cast. Speaking in 1985, Covington expressed some regret at this decision, but explained that she did not like Eva Peron and that without some positive feeling for the person she had preferred to turn the role down.

In 1978, Covington performed the role of Beth, wife of Parson Nathaniel (Phil Lynott), on the recording of "The Spirit of Man" from Jeff Wayne's Musical Version of The War of the Worlds.

Covington achieved chart success with a cover version of Alice Cooper's "Only Women Bleed" from her eponymous 1978 album. It reached #12 on the UK Singles Chart.

After recording a second solo album and guesting on other artists' albums she returned to the theatre, starring in the 1982 National Theatre production of Guys and Dolls, playing Sister Sarah opposite Ian Charleson's Sky Masterson. Russell Davies said that her performance "is of such a special timbre that she isn't easily matched." 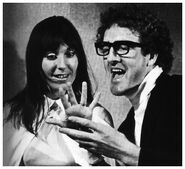 If you're looking for more actors, visit:

If you're looking for Shock Treatment actors, visit this page.

Retrieved from "https://rockyhorror.fandom.com/wiki/Julie_Covington?oldid=9670"
Community content is available under CC-BY-SA unless otherwise noted.