Linus O'Brien, Amelia O'Brien, and Joshua O'Brien
Richard Timothy Smith is an actor, writer, broadcaster, voice actor, and theatre performer born in Cheltenham, England. He is most known for writing the book and music for The Rocky Horror Show in 1973, Shock Treatment in 1981 and all the failed projects; also for his voice role as Lawrence Fletcher in Disney's "Phineas and Ferb".

Richard's family moved to Tauranga, New Zealand, in 1951 when his father, an accountant, decided to become a sheep farmer. Watching horror and science-fiction double features in nearby Hamilton, O'Brien added an interest in acting to his love of rock and roll.

He moved back to England in 1964, tried singing, then became a movie stuntman and fringe theater actor. He changed his name to O'Brien (his beloved maternal grandmother's name) one day while on the phone to British Actors Equity, to avoid confusion with another Richard Smith. He met director Jim Sharman in 1972, when Sharman cast him in the dual roles of Apostle and Leper for the London stage production (transferred from Sharman's native Australia) of "Jesus Christ Superstar".

Working again with Sharman on a production of Sam Shepard's "The Unseen Hand", O'Brien mentioned a new rock musical he'd been writing called "Rock Horroar." The play went into rehearsals as "They Came from Denton High," and at Sharman's suggestion, was retitled "The Rocky Horror Show" before opening in June 1973. The play became a film in 1975 called The Rocky Horror Picture Show.

He wrote the script in six months. He based the character Frank-N-Furter on Alice Cooper. In his original handwritten notes (published in the 1979 play book The Rocky Horror Scrapbook), he described Frank-N-Furter as an "Alice Cooper type Frankenstein”. On November 25, 2004, a life-size bronze statue of Richard O'Brien in his Riff Raff space suit was unveiled in Hamilton, New Zealand, where O'Brien grew up after moving from England. Commissioned jointly by a local theatre group and the Hamilton City Council, the statue stands on the site of the old Embassy Cinema, where O'Brien once watched science-fiction double features. O'Brien guest starred as the Narrator in The Rocky Horror Show Live in 2015.

He continued writing musicals with Richard Hartley like T. Zee (1976), Disaster (1978), The Stripper (1982), and Top People (1984). They both provided three songs for the film The Return of Captain Invincible (1983). O'Brien wrote his one-man revue Disgracefully Yours (1985) singing as Mephistopheles Smith. He also appeared in Jubilee (1977), Flash Gordon (1980), Dark City (1998), Ever After (1998) Dungeons & Dragons (2000), among others. Additionally he guest starred in five episodes in the third season of the HTV dramatisation of Robin of Sherwood, as the corrupt druid Gulnar. A music CD of the songs from Disgracefully Yours entitled Absolute O'Brien was released in 1998.

He played the role of the Child Catcher in the West End theatre production of Chitty Chitty Bang Bang. In 1995, he performed a select number of shows as Mephistopheles Smith in a musical/comedy show he wrote entitled Disgracefully Yours, which was later given permission to be adapted into a musical, performed first by Eubank Productions for the Kansas City Fringe Fest in 2006, and more recently by Janus Theatre Company for the Edinburgh Fringe 2007, simply entitled Mephistopheles Smith. In late 2005, he appeared (as the spirit of the mirror) in the pantomime version of Snow White, which played at the Milton Keynes Theatre. In the summer of 2006, he played the Child Catcher in the Queen's 80th birthday celebrations at Buckingham Palace.

In 2012 he gave a performance of song and autobiographical stories "It's Party Time with Richard O'Brien" at the Hamilton Founders Theatre to celebrate his 70th birthday. In June 2012, he returned to Hamilton, New Zealand to appear on stage as Fagin with the Hamilton Operatic Society's production of "Oliver!" at the Founders Theatre. Recently, in October 2016, he appeared as the Crystal Maze Computer in a one-off Celebrity Crystal Maze episode for the charity 'Stand Up To Cancer' on Channel 4. 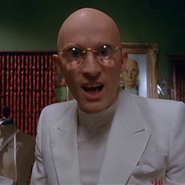 If you're looking for more actors, visit:

Community content is available under CC-BY-SA unless otherwise noted.
Advertisement